The Pursuit of Rattlesnakes

This summer, my team and I met with landowners, cottagers and visitors on the Bruce to dispel myths about the maligned Massasauga rattlesnake. We didn’t expect people to fall in love with rattlers, but we hoped they would come to appreciate and help protect them. After all, rattlers are as much a part of the Bruce as the limestone cliffs, sandy beaches and wild orchids.

While touring the Bruce we heard many personal accounts of Massasauga rattlesnake encounters. One woman told us that she had accidentally stepped on a rattlesnake while hiking near Cypress Lake just a week after spotting one on the same trail. Rattlers are notoriously shy snakes, but like all animals, they don’t like being stepped on. This individual snake did defend itself by striking, but the woman was wearing hiking boots so was no worse for wear (minus two tiny tooth-sized scuff marks on her boot). When asked if she would hike the trail again, the woman answered “of course”. There was no doubt in her mind that hikers (with protective footwear) and Massasauga rattlesnakes could safely share the trail.

Another woman told us that her first Massasauga rattlesnake encounter took place in the front yard of her Stoke’s Bay cottage. While sitting in a Muskoka chair she glanced down and saw a rattlesnake right beside her foot. It didn’t come towards her or even rattle, but she was afraid it might bite her. As she tells it, she screamed, flipped her chair over backwards, rolled herself out of it and ran to the cottage. She laughs about it now, especially since she’s learned that Massasauga rattlesnakes only bite when provoked or hunting small animals.

If a rattler wastes its venom on a person, it will have to expend a lot of energy to manufacture more venom before it can hunt and eat something more appropriate in size, like a rodent or a frog. Because of this, about a quarter of all defensive rattlesnake bites are actually “dry bites” that don’t involve a release of venom.

This cottager realized that she had set her chair along a route that Massasauga rattlesnakes take fairly often when crossing her property. She decided to move her seating area to another spot in the yard and has not had an encounter since.

Quite possibly the snakes crossing her front yard are on their way to a large property nearby. A man that we met a couple of cottages over has an expansive back lot to which he is adding a trail for family and neighbours. We walked along this carefully mulched trail with the landowner who knows for certain that rattlesnakes are on his property. Before we had even started in on our pro-rattlesnake spiel, he rattled off all of the points we normally make about the importance of protecting snake habitat and the ecological value of the rattlesnakes. This guy knew his stuff. He even knew the location of a Massasauga gestation site on his lot which he keeps under wraps because not everyone shares his affinity for rattlesnakes.

There are some anti-snake folks out there who would purposely destroy gestation sites in an attempt to eradicate the species. Such action would be highly detrimental to the species because several female Massasauga rattlers may use one gestation site and females often return to the same site year after year. In addition, the slow reproductive rate of the Massasauga rattlesnake (they give birth ever 2-3 years) makes protecting existing gestation sites very important for the long-term survival of the species. Luckily, this site has someone looking out for it.

It was encouraging to meet many rattlesnake enthusiasts while travelling the Bruce. Unfortunately we came across a couple people who freely stated their distaste for rattlers and their intentions to kill any that venture onto their properties. Rattlesnakes are a protected species. The maximum penalty for killing or harming a Massasauga is a $250,000 fine and/or a year in jail. The majority of people we met fell somewhere in the middle. They don’t love rattlesnakes or hope to find them on their properties, but they understand enough about the ecology of the Bruce to know that the rattlesnake is an integral component of the system. 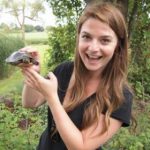 4 Replies to “The Pursuit of Rattlesnakes”