For decades biologists have been observing declines in woodland caribou across Canada and much effort has been put into understanding caribou range retraction and population loss. As Canadians we are attracted to woodland caribou because of their beauty and elusiveness and have granted them national icon status. Their loss is our loss, which is why Canadians care about protecting woodland caribou.

Through the years biologists have gained insight into the ways caribou react to humans on a large scale (e.g., they avoid roads, clear-cuts and other human-made developments). But we still have many questions about their behaviour on a small scale. As a graduate student I was one of many biologists interested to know if their selection of habitat had a negative impact on their diet. One of the major questions my graduate research focused on was whether caribou were facing a trade-off between diet quality and predation. For example, caribou are known to select forested wetlands (aka peatlands) to avoid wolves. Caribou are relatively adept at moving through the uneven water-logged layer of mosses and decaying plants that characterize peatlands. Wolves, on the other hand struggle to travel through thick, wet peat, making peatlands a safe haven for caribou.

The problem is peatlands are not thought to offer caribou abundant and nutritious forage. This is because peatlands are generally nutrient poor compared to drier, nutrient rich uplands. They are also known for their slow growing, stunted trees and unpalatable evergreen plants. Biologists were concerned that by selecting peatlands, caribou were limited to poor quality diets, which was further contributing to their population decline.

So, in order to determine if peatlands were in fact poor foraging habitat, my task was to compare differences in understory (plants < 1m tall) vegetation abundance and quality between peatlands and uplands. But, because not all of the forests stands that were accessible were the same age and/or were recovering from the same type of disturbance (wildfire or timber harvesting), I also had to investigate the effects of stand age and disturbance on upland and peatland understories.

My study took me to boreal forests north of Geraldton Ontario where I could access forest stands ranging in age from 10 to 130 years old. These forests were once burned or harvested, and were characterized as either an upland or a peatland. I hypothesized that caribou foraging in peatlands are more susceptible to population decline because peatlands offer poor quality forage. My prediction was that vegetation in peatlands was less abundant and of poor quality compared to upland forests. Vegetation abundance was determined by estimating total biomass (i.e. living plant material) and productivity (i.e. current years’ growth), whereas vegetation quality was determined by the amount of crude protein and fiber in the leaves.

Interestingly, while we were collecting data to determine what was available to caribou in boreal forests, we were also conducting a study to find out what caribou were eating by fitting them with HD cameras (think GoPro on a caribou’s collar). Turns out that no matter the type of vegetation available (e.g. shrubs, forbs, grasses and mosses), caribou consistently eat one type of vegetation – lichen.

Watch this footage of a caribou feeding on lichen, captured by collar camera.

Biologists were aware that lichens were a main staple in caribou’s winter diet, but the video footage showed us they rely on lichen for over 50 % of their summer diet too! This information led to more questions about caribou feeding behaviour because, out of all of the plant groups in the forest, lichens have the least amount of protein. A brief literature review suggests a few possibilities as to why caribou eat so much lichen, (1) they evolved from tundra caribou who also eat mostly lichen (2) it reduces competition with moose and deer, which dine on other plants), and (3) they produce an enzyme called lichenase allowing them to break down lichen more efficiently. But it still doesn’t give us a definitive answer and begs for further research.

My study suggests that, in general, the loss of lichen-rich habitats is more likely to be the main cause of caribou decline than caribou’s preference for peatlands. That being said, it is important to understand all the factors at play before we can carve out a solution to caribou loss. All in all, the research suggests caribou are practicing effective habitat selection and foraging behaviour, but we still need to investigate whether their selection of lichen, despite the abundance of better quality plants, is contributing to their decline.

Other great resources include, 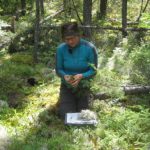 Erin joined Ontario Nature in spring 2015 to assist in the management of the Nature Reserves and Citizen Science programs.  Erin has a B.Sc. in Biology from Trent University and a M.Sc. in Ecology from the University of Guelph, with her research focus on boreal forest plant quality and the implications on woodland caribou diet.  She has over ten years of experience in terrestrial and aquatic biology and has a strong background in native plant identification and SAR monitoring.