Understanding Snakes: The Key to Their Survival

This summer, Josh Feltham worked with Ontario Nature on our Snake Monitoring project and helped us test our Long-Term Monitoring Protocol (LTMP) we developed for snakes in Ontario. The LTMP aims to develop methodology and acquire data to support habitat protection, species-at-risk management plans, and educational programming in order to protect snake diversity. Here, Josh conveys how he relates to the nature of snakes and the role of the LTMP in their conservation.

Like me, snakes are shy, solitary, and sensitive. Yet, even those who study and work with them rarely describe them as such.

Snakes are shy, and prefer to be out of sight, so they need to be masters of disguise and stealth. One of the reasons people are startled when they encounter a snake is because snakes are so difficult to detect: they are rarely seen before people are almost on top of them.

As a shy person, I can relate to the desire to stay out of sight. The LTMP for snakes in Ontario is actually directly linked to their shy, solitary, and sensitive nature in its design and purpose. The shy nature of snakes is a cornerstone of the project’s design. Researchers place artificial cover boards of wood or other materials on the ground in suitable snake habitat to provide a comfortable and safe retreat for shy snakes, while allowing for weekly monitoring.

Snakes are solitary, which is unlike humans for whom social interaction is a necessary component of survival. But on occasion, snakes will congregate. This rare event is related to the localized nature of a required resource, such as hibernacula (places for hibernation). Similarly, snakes will congregate under cover objects, which they use when they are preparing to shed, regulate their temperatures, and for foraging. The LTMP cover boards both appeal to the shy nature of snakes and address their preference to be solitary by providing a limited resource that encourages congregation rather than isolation.

Snakes are sensitive. Being a sensitive person I struggle with how to  interpret behaviours directed at me. I have learned to give people the benefit of the doubt assuming perceived aggressions are unintentional.

Unfortunately, as far as we know, snakes are not a species that have the capacity to reason. Their sensitive nature often results in their demise because when they they sense a potential threat close by, snakes make themselves known by displaying defensive behaviours that are misinterpreted, such as inflating and flattening their body, shaking their tail, hissing and striking.

While these “warnings” are often interpreted as aggressive behaviours, snakes are merely trying to avoid conflict by letting us know where they are and that they wish to be left alone.

In my experience, snakes that are frequently identified as being particularly aggressive usually belong to a very sensitive and nervous species that easily feels threatened by the smallest change or disturbance in its environment. If you compare this to human behaviour, you might think of it as someone who lacks confidence masking their insecurity by appearing overconfident.

This year, Ontario Nature engaged with a handful of individuals across the province to test the LTMP. Now, the analysis of the data will provide insight into the methods used. It will also guide the continued development of a means to learn more about the shy, solitary, and sensitive snakes with whom we share our space. The LTMP will assist in the conservation of species-at-risk and, hopefully, prevent the loss of common species through detecting changes in abundance before populations decline significantly.

You can learn more about Ontario Nature’s Snake Monitoring Project in the spring 2019 issue of ON Nature magazine.

This blog was originally published in the Algonquin to Adirondacks (A2A) Collaborative newsletter. The A2A collaborative is a U.S., Canadian, and First Nations partner organization that works with scientists, policy-makers, conservationists, communities, governments, and other local groups to protect and enhance the unique ecological features and functions of the A2A corridor. 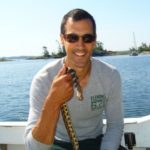 Josh Feltham is a Professor of Environmental and Natural Resource Sciences, and the Coordinator in the Ecosystem Management Technician/ Technologist Program at Fleming College.

4 Replies to “Understanding Snakes: The Key to Their Survival”