From historical references dating back to the 1600’s, tallgrass prairies were known to extend widely throughout southern Ontario ranging from Essex County to the Rice Lake plain. Since then, most of the prairies have been displaced by agriculture and development. Today, with less than 1% of the original area left as scattered remnants, they have become an ecological rarity.

There are two relatively large protected native prairie remnant reserves in Ontario: The Ojibway Prairie Nature Reserve in Windsor and Alderville Black Oak Savanna near Rice Lake. Surprisingly, situated in between the two locations, there is a thriving tallgrass prairie community at Bronte Creek Provincial Park in the western end of Lake Ontario. A rare find, indeed!

This 100+ hectares of tallgrass prairie is the outcome of a large-scale restoration project by the Bronte Creek Park Management some 8 or 9 years ago, in the effort to recover a rare ecosystem from retired agricultural fields.

The star of the Bronte prairie is a native tallgrass called Big Bluestem, a.k.a. Turkeyfoot, with very distinctive seed heads branching into 3 parts resembling a turkey’s foot. It can grow up to 2.5m tall. When you see it, you know you are in the prairie.

Other native tallgrass species are Switch Grass and Canada Wild Rye. There are also many unique wildflowers found interspersed among the tall grasses, for example, Hairy Bush-clover, Wild Bergamot, Missouri Ironweed, Virginia Mountain Mint and a variety of sunflowers. The biodiversity of the prairie supports many pollinators such as Monarch, Common Wood-Nymph, Viceroy, Painted Lady, and a variety of damselflies, dragonflies and wild bees.

Native tallgrass prairies in Ontario were once habitation for a unique assemblage of grasses and flowers, along with an equally diverse group of mammals, birds, amphibians, reptiles and invertebrates, many of them had been designated as at-risk or extirpated along with the prairies due to habitat loss.

The restored prairie at Bronte Creek Provincial Park is a great place to hike, enjoy nature and learn about this rare ecosystem. Just follow The Green Trail and the Purple Trail on the Park Map and look for the turkey’s feet! 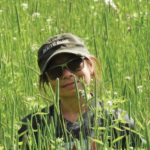 Mimi Chan is a dedicated member of Ontario Nature. A born-again biologist, she left the advertising world as a creative director and is currently a grad student in Environmental Science at Trent University.

2 Replies to “Looking for tallgrass prairies”