Hide and Seek With Snakes

As discussed in an earlier post on this blog, we get lots of questions from people asking for advice about their day-to-day encounters with nature. I joined Ontario Nature this summer and am thoroughly enjoying fielding some of those queries.

Through twitter, a farmer told us that he had not seen any snakes on his farm in Corbyville, near Belleville, in two years. In the past, he and his family regularly spotted garter and water snakes along with the odd grass and milk snake. Chemicals are not used on the farm, and frogs, toads and turtles are in abundance, prey species that attract the snakes. So, the farmer asked, what gives?

It may be that snakes have not, in fact, disappeared from this farm. Snakes are often present in an area even though we don’t see them. Many snake species in Ontario are either nocturnal or spend much of their life hiding under rocks, trees and bushes, or even underground. If there is appropriate habitat (including good places to hibernate) and enough prey (insects, frogs, salamanders, small mammals), then perhaps the snakes are still there, just well hidden.

Unfortunately, it is also possible that the snakes have indeed disappeared despite this farmer’s efforts to provide snake-friendly habitat. Snakes frequently cross roads in search of mates or food, or get to hibernation sites and consequently suffer high mortality rates because of road kill. Because they are difficult to see, drivers run over these reptiles all the time. 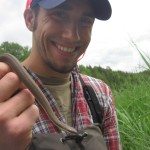 Former Ontario Nature staffer, James Paterson is a quantitative ecologist and conservation biologist interested in patterns of habitat selection, fitness, and abundance. The goal of his research is to explain spatial and temporal patterns in the abundance of wildlife. Currently, he's a Liber Ero Fellow at Trent University studying how habitat loss and road mortality affect local extinction risks of reptiles and amphibians.

4 Replies to “Hide and Seek With Snakes”