Helping turtles not cross the road

Slow-moving turtles are some of the most threatened wildlife in the province. Seven of Ontario’s eight species are at-risk, in large part due to roadkill. Most of the turtles found dead and injured on roads are females in search of nesting sites. 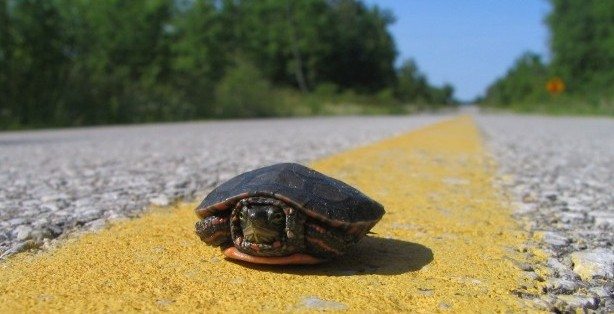 Turtles like to nest in sandy soils found in sunny locations so that their eggs remain warm enough to hatch. Often, females will travel several kilometers and cross multiple roads to find suitable nesting sites.

What if turtles did not have to cross roads to find nesting sites? Would this reduce the number of adult females and hatchlings hit by cars? Would this also increase the number of turtles recruited into a population by improving the success of nests? Could artificial nesting mounds placed in safe locations reduce turtle mortality and increase population recruitment? In 2009, we initiated a research project to answer these questions.

To increase the likelihood of turtles finding and using artificial nesting mounds, conservation biologists need to predict the paths of female turtles and place multiple mounds along those paths. With help from Ontario Parks and the Algonquin Forestry Authority, we constructed four nesting mounds in safe locations in Algonquin Provincial Park. The mounds were made of sand and gravel, the same mix used on roadsides.

We tested three criteria that needed to be satisfied for the hypothesis to be supported:

Female turtles were indeed able to find the artificial nesting mounds. We found four nests on the mounds, which was more than expected based on the area of the mounds relative to the area of natural nesting sites. Moreover, when we used observations of females walking from wetlands to natural nest sites to estimate paths females would need to take to encounter the mounds, we determined that females were actually unlikely to have walked across the mounds. This suggests that we could have increased the number of nests on mounds if we had placed them where females were more likely to encounter them. 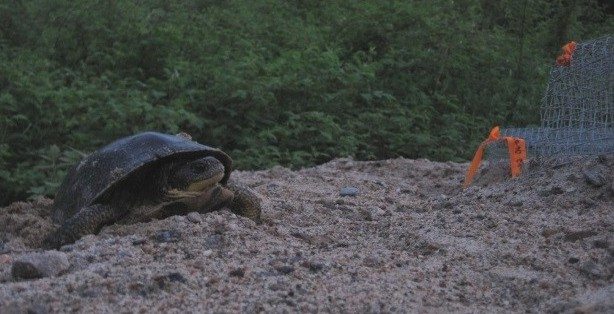 Our research demonstrates that artificial nesting mounds – if properly placed – can reduce the negative impact of roads on turtle populations. Also, attracting females to artificial nesting mounds may increase nest success. It is exciting to consider how this simple and inexpensive intervention can help protect and restore at-risk turtles turtle populations in Ontario .

For more details of our research, read “Not just any old pile of dirt: evaluating the use of artificial nesting mounds as conservation tools for freshwater turtles.”

For a historical look at the implication of roads on protected areas, read this paper by Fenech, Taylor, Hansell and Whitelaw.

Visit the Ontario Reptile and Amphibian Atlas website to learn more about Ontario’s herpetofauna and contribute to its conservation.

14 Replies to “Helping turtles not cross the road”