Late last month, I returned from six restorative days of canoeing in Killarney Provincial Park amidst fall colours, good weather and close friends. It reminded me of an Indigenous distinction between spending much-needed time in nature, in “what made you” versus our all-too-common experience of being distracted by the superficial world of “what you made”.

As a career outdoor and environmental educator, I seek to expose people of all ages to the beauty, wonder and interbeing of that first world… the one upon which all life depends, the one I experienced in Killarney with, among other things, the calls of the loon and the barred owl. But we are now increasingly caught up in our own artificial creations.

There is an extinction of direct experience that separates us from what really matters in ways that both diminish ourselves and threaten the future of life on earth.

In 2010, I was trained by Al Gore as a Climate Reality volunteer presenter. Since that time, I have made 669 presentations to a wide variety of audiences and easily spent more than 10,000 hours researching the science of climate change and its solutions.

While I do my personal part in terms of driving an electric vehicle, eating less meat, and getting off natural gas for home heating, I also realize that it is more important to change laws than light bulbs, that government-led system change is urgently needed. As teenage climate activist Greta Thunberg aptly points out in this December 2020 video, this can only come about when “we, the people” demand such change — loudly, persistently, and in large numbers.

In Canada, there have been seven federal elections since 2000, and five of them have resulted in minority governments. While such results are usually seen as an inevitable outcome of the divisions among Canadians, perhaps it’s time for a new interpretation. We don’t trust majority governments. We want our politicians to work together for all Canadians.

The results of our recent federal election present an opportunity that may well be our last and best chance for addressing this emergency. Canadians elected a number of MPs identified as “climate champions” by non-governmental organizations (GreenPac, Leadnow and 350 Canada). They include ten New Democrats, nine Liberals, four Conservatives, two Bloc Quebecois and two Greens.

What if these individuals formed a climate caucus within their respective parties… a group that coordinates with each other and with their caucus as a whole? What if they appear together for press releases, with different members taking turns as spokesperson? In the midst of a climate emergency, why are we stuck with the practice of having one person as the party spokesperson on a particular file or issue? Surely a mini-caucus idea would raise the profile of this truly existential, non-partisan and time-sensitive global issue. Surely it would more readily convert words into deeds.

If parliament is serious about working together on what is surely the mother of all issues, what if we had just ONE climate caucus that advised the government? Could we even go as far as forming a coalition government that uses a climate lens for all its decisions?

One thing is overwhelmingly clear: we must change the way we conduct business in our elected parliament. We must shed partisan posturing in the face of the greatest crisis to ever face us. We must adopt a common approach to our common problem.

Write your MP. Promote the climate caucus. Suggest that they spend several days canoeing in Killarney together.

Subscribe to our blog to receive weekly email alerts about breaking conservation and environmental news. 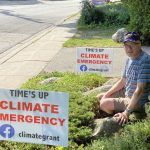 Grant Linney made a keynote presentation on climate change at the Ontario Nature annual gathering in Cambridge on May 23, 2015. He has also appeared several times at the annual fall Ontario Nature Youth Summits for Biodiversity and Environmental Leadership.