No experience is required to participate in BBW. Participants can use interactive identification keys to choose features visible on their bee, such as the colour pattern on the abdomen or the presence/absence of a dot or band on the thorax, to narrow down the potential species and assign a name to their bees. On average, participants were accurate about 53% of the time, although some species were frequently mis-identified. For example, of all the photos identified by participants as the yellow bumble bee (B. fervidus), experts asserted the labels corresponded to 32 different species! The reasons for this are varied, but misidentification may happen with species with wide-spread distributions and/or many colors. We are creating more resources such as identification guides with regional atlas projects and an ever-increasing gallery of verified images to help participants, but they already report an increased awareness of species diversity and improvement in their identification skills. 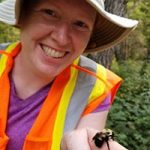 Dr. Victoria MacPhail has been working in the field of pollinator conservation for almost two decades, and has expertise in plant and pollinator identification, reproduction, and interactions. She is a founding member and current co-Chair of the charitable organization, Pollination Guelph, and helped launch and continues to administer the Bumble Bee Watch program. She loves hiking and always keeps her camera close at hand!

On June 2, 2022, we have an opportunity to elect biodiversity and climate leaders. The next Government of Ontario will make a generational difference.

Raise your voice for biodiversity protection and climate action.