Have you ever wondered how different species adapt to survive the coldest months of the year? Animals have different mechanisms to stay warm and source food when options are scarce, but human-caused disturbances like habitat degradation and climate change pose additional challenges to species that are already at risk.

COP 15 (also known as the United Nations Biodiversity Conference), started in Montreal last week, so, biodiversity conservation is top of mind. Keep reading to learn about some of the amazing species at risk that inhabit the north of our province, and how they have adapted to harsh weather.

Did you know that Ontario has two native species of bears? Unlike the more ubiquitous black bear that can be found hibernating during the winter months, the polar bear is actively heading north onto sea ice when the season gets cold enough. Ontario has the world’s southernmost population of polar bears, with them only found in the far north along the coasts of Hudson Bay and James Bay.

Polar bears have amazing adaptations to survive winter, like their thick, water-repellent fur. Though it appears white, their fur is translucent, which helps them blend in with the ice and snow, giving them an advantage when hunting.

Climate change has a direct impact on polar bears by raising temperatures in northern regions. This affects the stability and longevity of sea ice that the bears use to hunt and find mates, as well as denning sites due to changing permafrost conditions.

Boreal caribou are found across the boreal forest in Ontario and live there year-round. They require large undisturbed tracts of land with a preference for mature conifer dominated forests. When the snow falls, caribou are right at home with thick coats to keep them warm: the hairs are hollow which helps insulate them and allows them to be extremely buoyant when in the water. Caribou hooves are broad, which can act as natural snowshoes for walking across areas of deep snow cover or as shovels to help scrape snow away when foraging for buried lichens.

Caribou have a low reproduction rate, having only one offspring every year. To combat this low birth rate, they separate themselves from denser populations of moose and deer, which helps them stay away from large predators like wolves and bears. As they need the entire landscape intact to ensure their survival, this species is very sensitive to habitat loss from human disturbances such as mining, forestry, road development and hydro line corridors. Climate change may also impact their future by influencing habitat, food sources, and predator distributions in the north.

This species is one of the best adapted for the harsh boreal winters in Ontario. They have a very thick coat of fur which helps insulate against some of the lowest temperatures in the province. Much like the caribou and polar bear, wolverines have very wide feet to walk or run deftly across large amounts of snow. They have strong jaws and have several teeth that face inward to tear into frozen animal kills. They also have the strength to crack open bones left behind by wolves to eat the marrow and bone itself when prey is scarce. Lastly, their sense of smell is second to none – they can smell carrion from kilometres away, even when it is buried under two meters of snow!

Like caribou, wolverines have very low reproductive rates, with females only having a litter about every two (or more) years. When you combine their low birth rate with habitat fragmentation from mineral extraction and forestry, wolverine populations may have difficulty recovering past a certain threshold.

All these incredible animals are listed as “Threatened” in Ontario under the Endangered Species Act, 2007. They are primarily affected by climate change and human disturbances to the environment. This year, government officials, concerned experts and environmental change makers from across the world will meet at COP 15 to make critical decisions for nature. Together, we need to demand policy makers commit to a carbon free future and ensure the protection of amazing animals like these.

To learn more about the history of COP 15 and the convention’s goals visit their website or watch the sessions live. 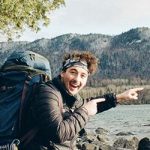 One Reply to “Winter Adaptations of Northern Species at Risk”