The beauty of birding

Last Saturday, I almost missed my birding outing. When my alarm woke me up, it was still dark outside. The weather report promised severe fog east of Toronto and it was drizzling. Hardly ideal weather conditions for spotting a grayish, drab-looking bird called the Townsend’s solitaire.

But I didn’t want to miss seeing a geographical rarity, named after the ornithologist John Kirk Townsend, no matter the weather conditions. Fog or no fog, I wanted to see the bird that usually graces Western mountain regions, whose drabness even Sibley admits in his description. The most exciting features on the Townsend’s solitaire are its “white eye-ring” and “bold buffy wing-stripes” resting atop a “uniformly grey body.” Who knew how long it would stick around?

I thought of turning back during my drive east along Highway 401 when thick fog clung to the highway with such ferocity that I could barely see the headlights in front of me. And I started thinking about birds and weather and wondering why it is that the two are so rarely in sync. Some of my most memorable birding trips have been on days when the weather was least cooperative. I remember a windy, rainy day at the Blenheim lagoon when I was mesmerized by a colony of tree swallows as they struggled in their fight against the oncoming wind, they fluttered in one place like indecisive butterflies, some of them flying backwards. I have the image etched in my mind, and I think of those exquisite swallows, emblems of adventure and fearlessness, every time I contemplate rolling over and going back to bed to avoid birding in bad weather conditions. 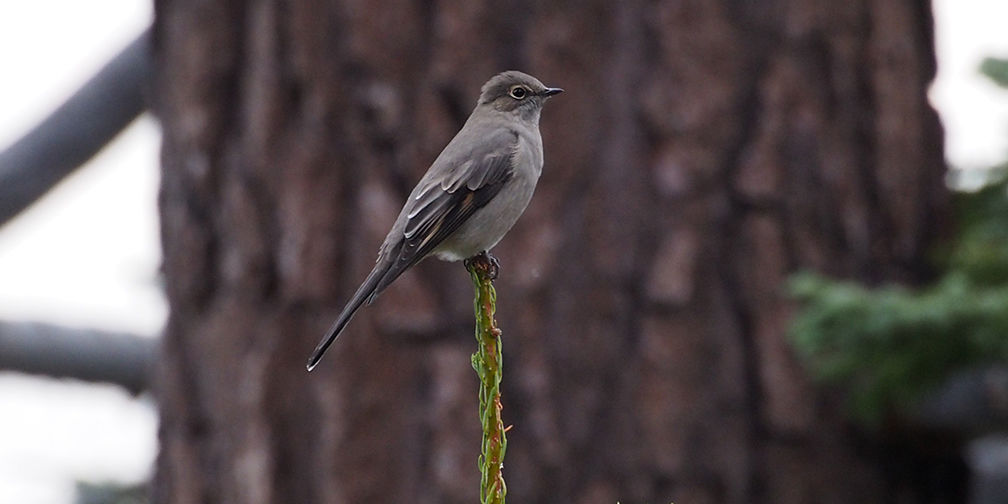 We did end up finding the Townsend’s solitaire not far from the Ganaraska forest in Clarington. There he was, atop a branch of a dead tree, bathed in fog. A silhouette of a bird, even through the sharpest of scopes, is all we managed to see after a 1.5-hour drive. We weren’t the only ones who had travelled the distance; there were at least 30 birders huddled together, discussing the bird’s song, a high-pitched whistling “whee” sound, and waiting for the fog to lift. After about 45 minutes, and a few redpoll sightings, I took one last look at the majestic silhouette and we were off. A detailed view of the bird in all of its uniform drab grayness was not to be. The bird will remain on my list as what Todd Newberry calls a BVD: a better view desired. 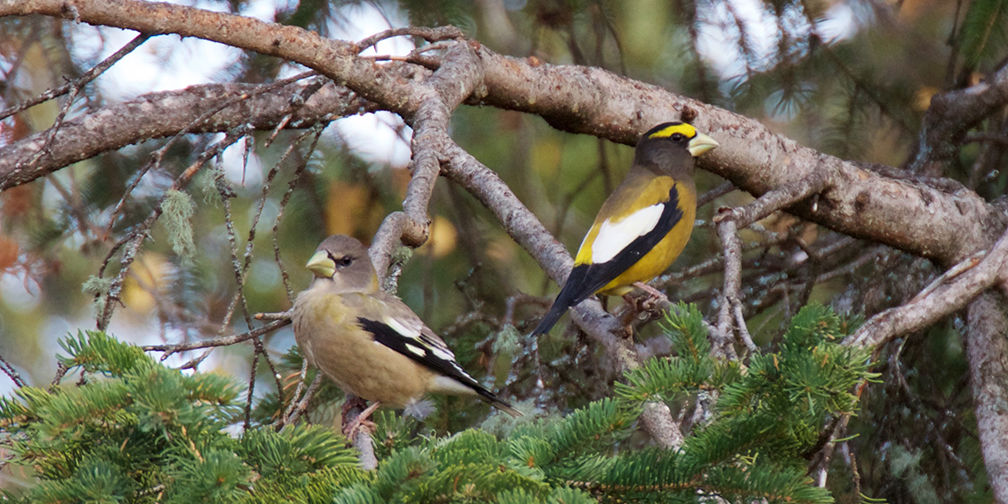 We wanted to see a particular target bird, but in the end the fog broke and we came across something infinitely more stunning: a flock of evening grosbeaks, including a stunning, bright yellow and black male who was clearly enjoying all the female attention he garnered. The grosbeaks were surrounded by radiant blue jays, whose color never ceases to amaze me even though they’re such common birds.

And that’s the beauty of birding. You set out in search of one thing, and end up finding equally or even more exciting opportunities, almost without trying, just by being there, simply by showing up.

4 Replies to “The beauty of birding”