Nearly two centuries ago, non-native aquatic species began their invasion of the Great Lakes, travelling within the ballast stones and ballast water of large ships.

Upon departure from Europe and other far-away seaports, these ships would draw water and stones to maintain their weight and balance, carrying non-native invertebrates and other living things until their release upon entering the fresh waters of the Great Lakes.

Since then, over 180 species, not native to the Great Lakes, have been introduced and established both intentionally through practices such as stocking of game fishes, and unintentionally as a consequence of ballast water and global trade. Not all of these non-native species have had a significant impact on the Great Lakes but some, termed aquatic invasive species (AIS), have dramatically altered the ecosystem. Even the introduction of a single AIS can have widespread and diverse ecological and socioeconomic impacts, such as the loss of native species and fouling of beaches and water intakes. 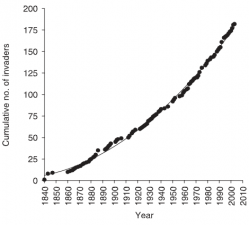 To better understand and ultimately reduce these impacts, the Mandrak lab is conducting research on the characteristics of AIS, their introduction into the Great Lakes and how they are spread. Baitfish use, aquaria,water gardens, and live food markets are just some of the ways this spread of invaders may occur. Modeling undertaken in our lab has shown that human activity provides a rapid mechanism for the overland movement of AIS across substantial geographic distances, which can lead to the spread and establishment of new populations. 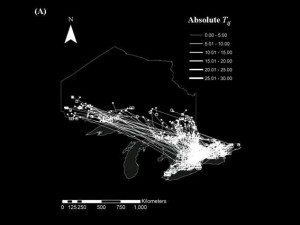 Human-mediated movements of small baitfishes across Ontario. (Drake and Mandrak 2010)

Predicting what species will invade and the magnitude of their impact remains a significant challenge. Our lab is developing innovative methods to predict the establishment and impact of potential fish invaders using niche theory, which explains species coexistence on the basis of ecological similarities and differences. To explain further, consider these two competing hypotheses. The first holds that invasive species may play very different roles than native species, occupying very different niches and are, therefore, able to exploit unused resources within the ecosystem. The second hypothesis holds that invasive species may play very similar ecological roles to native species, occupying similar niches and sharing preferences for local environmental conditions such as habitat and prey.

Early detection and rapid response are key in preventing the establishment, spread, and impacts of aquatic invasive species. To aid early detection, we are developing more effective methods, such as the use of underwater cameras. We are currently testing the use of underwater video to detect and monitor the secondary spread of the invasive round goby (Neogobius melanostomus) into tributaries of the Great Lakes – home to numerous species-at-risk.

If successful, the use of underwater cameras will provide a non-invasive, cost-effective method to detect invaders across numerous locations simultaneously. This will substantially reduce the resources required for sampling and increasing the overall effectiveness of an early detection program.

New technologies combined with strong environmental policies have also shown promise in preventing the arrival of new invaders and, recently, introduction of AIS in the Great Lakes basin have decreased as a result of ballast water treatment and new attitudes towards stocking.

While gains have certainly been made, invasive species remain a key threat to the Great Lakes and freshwater ecosystems globally. Understanding pathways by which species are being introduced, identifying species with the greatest potential to become invasive and early detection will be key to stop the Great Lakes invasion. The research conducted by the Mandrak lab will be an important contribution to the development of science-based methods to manage invasive fish species, including the conservation of biodiversity in Canada and beyond. 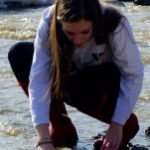 Sara Campbell is a PhD student in the Mandrak Lab. She is interested in exploring spatial and temporal dynamics of different biodiversity metrics in response to the introduction of non-native fish species and subsequent extirpation of native fish species. 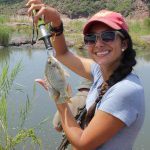 Rowshyra Castañeda is a PhD student in the Mandrak Lab and the South African Institute for Aquatic Biodiversity (SAIAB). She is currently developing new detection techniques for rare freshwater fishes. @Rowshyra 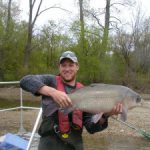 Andrew Drake is a Post-doctoral Fellow in the Mandrak Lab. His interests involve aquatic ecology and ecological risk assessment, including the development of models to better understand the invasion process and provide guidance for environmental policy. 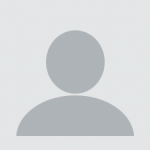 Nicholas Mandrak is an Associate Professor in the Department of Biological Sciences at the University of Toronto Scarborough. His lab conducts research on the biogeography, biodiversity, and conservation of freshwater fishes. @UTSConservation

2 Replies to “Stopping the invasion”