Tiny and adorable red-eared slider hatchlings are frequently bought as pets and then later released “into the wild” when they out-grow their aquariums, or when their owners tire of them.  This species is native to southcentral United States and northern Mexico, but – thanks mainly to their release by pet-owners – are now found in many other places, including Canada, Cambodia, China, France, Germany, Greece, Netherlands and Israel.

Scott Gillingwater, Species at Risk biologist with Upper Thames River Conservation Authority in southwest Ontario, is heading a long-term study of released red-eared sliders. With over seven years of data and observations, Scott has determined that sliders are surviving multiple winters, mating and laying eggs in Ontario. In addition, they enjoy a high rate of hatching success for their one or two egg clutches a year.

Scientists are unsure about the long-term impacts these non-native turtles will have on native turtle populations. However, in the short-term, there is a real possibility of released turtles transmitting diseases to native turtle populations.  Pet turtles may be diseased, and, if released, may pass diseases onto wild turtles.  In the United States, box turtles and tortoises have tested positive for pathogens that can be traced back to captive animals.

Before you purchase a red-eared slider as a pet, consider that they live for 20 – 30 years and attain a length of 30 cm/12 inches. If these facts do not deter you, consider adopting an abandoned red-eared slider instead of purchasing a new one. And if you see red-eared sliders in the wild, report them to the Ontario Reptile and Amphibian Atlas.

Ontario Streams, an environmental NGO, is working with the pet industry to tackle the issue of released red-eared sliders. “Keep. Care. Be Aware.” is their campaign.

Want more info? Here is a video on aquatic invasive species arriving via the pet and pond garden industries. 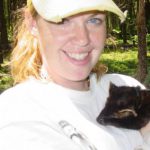