Hello, my name is Robert Ormston, but you can call me Bob. I live in Trenton, a town near Prince Edward County. I am 16 years old and in grade 11 at Bayside Secondary School.

From a young age, I have been interested in birds. I enjoy watching them at feeders, observing them in the woods and reading about them in books. I even chose raptors as the topic for two speeches I gave in primary school. Despite this, I only started birding this year, thanks to the 2011 movie with Steve Martin and Owen Wilson called “The Big Year”. I had never heard of a big year, which is competition or personal goal to see or hear a large number of bird species within a single calendar year, but the idea intrigued me. Coincidentally a new year was about to begin, so I decided that I would forgo a New Year’s resolution and begin a big year instead.

On January 1st, I set out to find as many species as possible around town. The first birds I encountered were rock doves across the street from my home. Just a block away there were juncos, nuthatches and chickadees hanging around a telephone pole. In total I encountered eight species on the first day of my big year. Not bad.

Throughout the year, I went on daily bird walks around town. But eventually I needed to venture farther afield to find new species. I took weekend trips to various nature reserves and conservation areas including Presqu’ile Provincial Park and Prince Edward Point. This was a great way to explore the province and add to my big year list.

Each time I went on a birding excursion, I came back with a camera full of photos and stories to share with friends and family. One of my favourite stories is that of an elusive great crested flycatcher. I heard the bird – which is enough to be added to a big year list – and could have just gone home, but was determined to also see it and take its picture. In stealth mode, I waited until the flycatcher called, inching quietly toward it every time it did. This led me off the path and into the woods. That day was hot, humid and full of bugs, but I continued my search until I could hear the flycatcher directly above me. I looked up and there it was, posing for me. I steadied my camera the best I could while fighting-off mosquitoes and snapped a photo. At that point, my day was complete and I headed home feeling satisfied.

To date, I have 127 species on my “big year” list, and I’m confident that number will increase before the end of the year. Doing a big year has been fun, educational and a great way to get away from the stresses of school. I encourage anyone with an interest in birds, no matter what age or skill level, to do a big year. You won’t regret it! 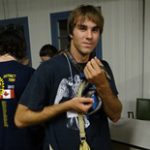 Robert Ormston (Bob) is a 16 year old with a growing interest in birds and nature. He attends grade 11 at Bayside Secondary School in Trenton, a town near Prince Edward County.