Birding to protect the places we love: Wabakimi Provincial Park

It’s late spring in northern Ontario. I am sitting on a beautiful peninsula, listening to the ethereal song of the Swainson’s thrush, and watching the sunrise over a quiet, peaceful lake. Does it get any better? This is the beauty of the Wabakimi area. Earlier this year, I joined the Friends of Wabakimi (FOW) on an eight-day canoe trip to conduct Breeding Bird Atlas surveys in an area that the FOW has proposed as a candidate for protection. Keep reading to find out some of the trip highlights.

Canada has committed to protecting 25% of lands and waters by 2025, and 30% by 2030. Currently, under 11% of Ontario is protected. Last year, when the province announced its plans to expand the protected areas network in Ontario, dozens of communities and organizations came forward with recommendations on areas to consider. One such area is known as the “D’Alton Block” within the Wabadowgang Noopming Forest.

The “D’Alton Block” is located between Wabakimi Provincial Park and Whitesand Provincial Park. Filled with interconnected lakes and rivers, it is known to have caribou habitat and migration corridors, as well as historic portages and pictographs.

Traipsing through the portages, it is evident that few people use them these days. Judging from the evidence, mostly scat and teeth marks, moose and beaver have been doing most of the upkeep. There is no shortage of wildlife around. We were lucky enough to spot a moose cow and her calf trudging through a swampy area and even saw caribou scat at one of our shoreline campsites.

The portages were grueling at times, but also incredibly diverse and beautiful. Within the thick coniferous-dominant areas I documented bird species such as the American three-toed woodpecker and brown creeper, both of which are known to be indicators of healthy old-growth coniferous forests. In addition, the stands of mature poplar with shrubby alders were teeming with warblers. The most exciting sighting for me was the bold Canada warbler. This species is federally and provincially regarded as a species of concern, largely due to the threat of habitat loss.

We documented 62 bird species, including some who were confirmed to be nesting in the area: tree swallows, least flycatchers, Canada jays and common ravens. At the time of our trip – in late May – it was a bit too early in the breeding season to confirm that the later breeders, such as many warbler species, are nesting in these specific areas. Even so, many of these birds were singing in prime habitat which is a good indication that they may soon be.

The FOW is a non-profit organization hoping to increase protection of the ‘D’Alton Block’ and other areas adjacent to Wabakimi Provincial Park. They note the potential for recreational canoeing and habitat for caribou as some factors to consider.

There are several stakeholders in this area, including tourism operators and recreational paddlers. There are also Indigenous communities whose ancestral lands overlap with the area, who are participating in the forestry industry and/or continuing their cultural practices such as hunting and trapping. As the conversation about protection continues, Free, Prior and Informed Consent by affected Indigenous communities must be kept at the forefront, along with the long-term sustainability of the local economy and the protection of critical habitats for species at risk such as caribou and Canada warbler.

There is no doubt that permanently protecting this area may be complex. However, after seeing it with my own eyes, the ecological, recreational and cultural value of this site is undeniable. I would love to visit it again, and I hope when I do, the forests are still filled with bird songs. 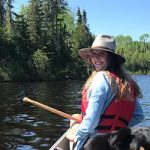 Kristen joined Ontario Nature in November 2021. Kristen is a long-time bird lover from Thunder Bay who discovered her passion for the feathered friends while admiring Canada Jays at camp at a young age. She has an B.Sc. in biology from Lakehead University. Since graduating she has spent time volunteering at Thunder Cape Bird Observatory, working as a wildlife rehabilitation assistant at MARS Wildlife Rescue on Vancouver Island, and creating avian-inspired artwork. She is excited to share her passion with fellow birders and hopes to spark excitement in the bird-curious folks.

One Reply to “Birding to protect the places we love: Wabakimi Provincial Park”