Walk along the trails of Rockwood Conservation Area or paddle the Eramosa River and the story of our geological past unfolds.

You see yawning potholes and caves, towering limestone bluffs and the winding flow of the Eramosa. It makes you wonder if you have been transported into the past… or into a Lord of the Rings scene!

Rockwood Conservation Area was just one of my stops on a day that took me across Wellington County in southern Ontario. Accompanied by Josh Wise, Ontario Nature’s former Greenway Program Manager and Emile Compion, Greenbelt Project Coordinator with Wellington Water Watchers, we explored many of the natural areas and water systems found in the county.

We met in Guelph where the Eramosa and Speed rivers converge and flow southwest to meet the Grand River in Cambridge. Walking alongside the river, I watched dragonflies flit by while kayakers and canoers enjoyed a clear day on the water.

Unlike the regions to the east, most of Wellington County is not included in the Greenbelt Plan, leaving it vulnerable to urban sprawl. As we left Rockwood, we drove past sites already under intensifying development and saw sections of land abraded and empty.

Organizations like Wellington Water Watchers are advocating for Greenbelt expansion to protect these important areas around the Greater Golden Horseshoe. They are pushing the government to recognize this region for its valuable water supplies in need of immediate protection. “Greenbelt protection for the rivers and moraines of Wellington County would complement [government] policy, permanently protecting the drinking water of a fast-growing population,” Emile said.

Our last stop was at the Elora Gorge and the Grand River. Descending 75 feet into a ravine of ancient dolomite bedrock, we made our way to the largest river in southern Ontario. Up ahead Emile pointed out the historic Elora Mill built in the 1850s and I realized how much history we unearthed that day.

Natural forces took thousands of years to create this region. Without adequate protection, its landscape and water could be forever altered in a much shorter period of time. 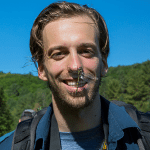 David Coulson is a photographer and visual storyteller whose work focuses on sharing stories about natural history, conservation and people’s connection to nature. He was a Communications Intern with Ontario Nature.