It’s not ok to hunt turtles

Question: How is it that the Ontario government can include snapping turtles on the provincial endangered species list while at the same time allowing, and even encouraging, the hunting of these long-lived reptiles?

Staff ecologist John Urquhart wondered this too, and put the issue to the Ministry of Natural Resources (MNR) last December. The response, which we received earlier this week, raises tough questions about MNR’s commitment to species protection. 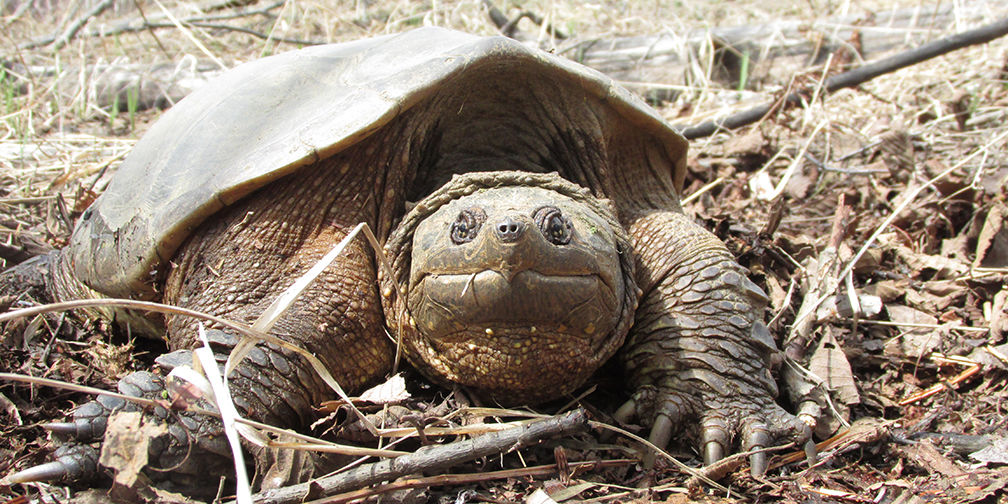 Both Ontario and the federal government have recently listed the snapping turtle as a species of “special concern.” The reason: snapping turtles have an “extraordinarily low” rate of reproductive success, and their numbers depend, in large measure, on their longevity. According to John’s submission, that means the populations are very vulnerable to increases in adult mortality. “An increase of only 1% mortality over natural rates can cause the gradual extinction of the population.” In a community of just 200 turtles, John estimates, it would only take two “human-induced” mortalities, i.e. hunting, as well as accidental or intentional road kills, per year to wipe out the population.

Indeed, there’s plenty of anecdotal evidence that hunters have been targeting snapping turtles. In 2009, an Ontario Nature member found at least six snapping turtle carcasses piled up behind a bush on our Kinghurst nature reserve. Last year, our conservation science manager, Mark Carabetta, saw the remaining bones. “It’s awful to come across something like this on a reserve,” says Mark. “These places are supposed to be sanctuaries for wildlife. The Province is sending mixed messages. On the one hand, a species is supposed to be protected when it’s on the endangered list. On the other hand, you can kill those species.”

MNR, for its part, allows hunters to kill two snapping turtles per day, with a five per bag limit. The season is year-round for most regions. Those levels date back to the 1990 imposition of “conservative” regulations designed to curb aggressive commercial turtle hunting. The current limit, according to MNR, “has helped ensure that snapping turtle has remained widespread and locally abundant within its core range.”

MNR claims its approach to species protection is to ensure the viability of snapping turtle habitats, such as wetlands. What MNR didn’t explain in its response to us is what has happened to the turtle population since 1990 that would have prompted Ontario to list it in 2009 under the Endangered Species Act.

As if all this wasn’t bad enough, the government won’t deliver a management plan outlining how best to protect snapping turtles until September (or later) 2014. MNR assures us there’s absolutely no urgency. “The relatively low number of individual harvesters, combined with the implementation of conservative regulations, has significantly reduced the number of snapping turtles that can be harvested each year.”

We didn’t understand that explanation, either.