It’s Cool to be Cold: The Importance of Coldwater Streams

It’s not nice when someone gives you the cold shoulder or a cold stare, but when it comes to streams, it’s cool to be cold!

The Government of Ontario has identified coldwater streams as a building block for Greenbelt expansion. Here’s why that makes sense.

What Are Coldwater Streams?

Coldwater streams are fed by groundwater and they remain cold all year. These streams often flow during dry periods because they are not dependent upon precipitation or other surface water.

Coldwater streams are generally less than 19˚C. Healthy cold water streams have native vegetation along their stream banks, fast flowing waters, and habitats such as riffles, pools and runs.

Why Are Coldwater Streams Important?

Coldwater streams are important regulators within a watershed. They improve water quality and biodiversity by reducing excess sediment and nutrients from traveling downstream.

Coldwater streams are a hub of biodiversity. They support insects such as mayflies, caddisflies and stoneflies. The juvenile insects can indicate water quality and are also a source of food for fish!

Many fish species are restricted to coldwater streams. Brook trout, for example, require a year-round supply of cold water, between 11 ˚C and 16˚C. But increasing stream temperatures have resulted in declining numbers of brook trout.

Within the area overseen by the Toronto and Region Conservation Authority, brook trout populations are found in the Duffins Creek, Humber River and Rouge River watersheds, largely restricted to areas overlapping with the Oak Ridges Moraine (a significant headwater feature) and the protected countryside of the Greenbelt.

Another coldwater fish is the endangered redside dace, which thrives in the pools of small streams and headwaters that have a gravely bed. Due to habitat loss, however, redside dace in Ontario are restricted to headwaters primarily in the Greater Toronto Area.

There are several threats to the health of our coldwater streams including:

Urbanization: Increased development causes erosion, sedimentation, and an expansion of impervious surfaces. Together, these can contribute to a rise in stream temperature. In the Credit River, water temperature stations have regularly exceeded their temperature targets between 2004 and 2014.

Commercial use: The use of groundwater for commercial purposes (e.g. municipal, golf-courses, bottled water) reduces the amount available to recharge coldwater streams.

How Can We Protect Coldwater Streams? 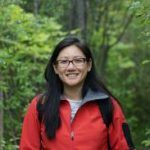 Joyce Chau is the Executive Director of EcoSpark, is part of the Oak Ridges Moraine Partnership along with Earthroots, Ontario Nature and STORM coalition.