Life on a nature reserve

When Ontario Nature’s staff ecologist, John Urquhart, asked if I (the new guy) could spare a couple days out of the office to help with some field work at our Lost Bay Nature Reserve, I didn’t hesitate. John’s “second office” is a quiet lakeside cabin in eastern Ontario with no electricity or running water, a true escape to nature. We figured we’d undertake a turtle inventory and some plant identification in the reserve as part of Ontario Nature’s At-Risk Species Inventory and Habitat Assessment. We were especially focused on finding northern map turtles, a species at risk in Ontario.

With the sun breaking through the light cloud cover, John explained where the turtles would be and his different strategies for catching them. 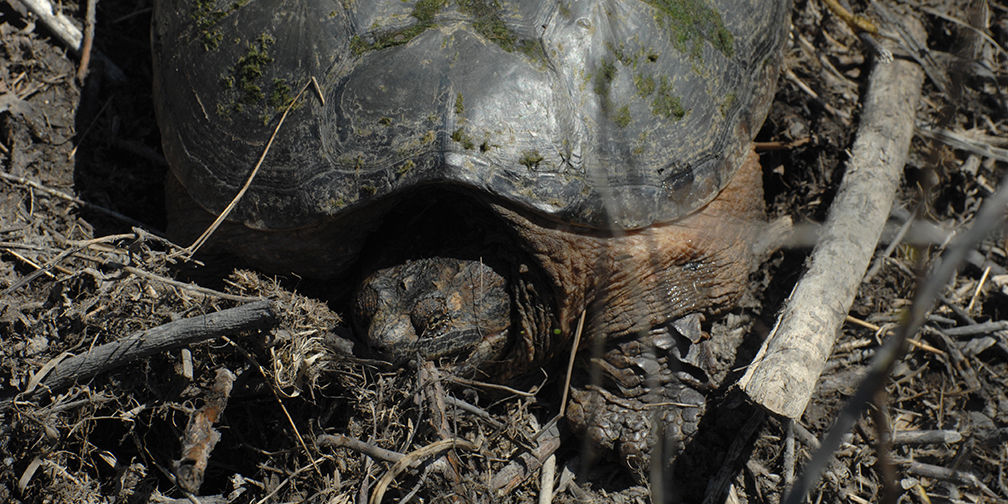 All suited-up, we swam towards the vegetation-filled water where John had spotted some turtles. As quietly as possible, we approached the thumb-sized turtle heads poking through the water’s surface. With just the top of my goggles and snorkel poking out of the water I could see a turtle staring at me, trying to figure out if I was something it should be worried about. At the last minute, the turtle decided it didn’t want to stick around and find out what my motives were and plopped under the water. In a heartbeat, John dove down. In seconds he emerged with a big grin and a turtle! The first catch of the day was a male map turtle (identified by its distinctive yellow strips under the shell, long front claws, a long and thick tail and small size, compared to the female). Now I knew how it was done.

Over a couple hours “we” caught 10 turtles for identification (John captured nine of them). By the end of our second dive a day later we were up to 19 turtles (with the help of Ontario Nature ecology assistant Laura Robson). A good mix of map and midland painted turtles, with an eastern musk turtle (aka stinkpot) to boot. John was happy with our success and I was happy to spend a couple days swimming around getting out-smarted by turtles (at the end of two days, I had still only snagged one turtle).

It was a great experience to get out into the field and see the diversity of life that exists on this nature reserve. Now back at my desk, I am quickly reminded of how important the work of Ontario Nature is. The Nature Reserves and Greenway programs exist so that ecologically significant areas –like Lost Bay– are protected while still expanding conservation areas so that this rich diversity of life can remain on the landscape. Sitting in an office in downtown Toronto it can be easy to forget how lucky we are to have so much natural beauty throughout the province. I’ll always eagerly accept an invitation to explore our wild spaces.