There’s a hole in my atlas

Ontario is a big place to try and conduct a detailed herp atlas. Mapping the distribution of species using 10×10 kilometre grid squares carves the province up into big chunks. There are over 1,000 grid squares in southern Ontario alone. Trying to get coverage in all, or even most, of these squares is a challenge. As an atlas co-ordinator for the Ottawa area, I wanted to know how well we were doing covering the area and also where else we should be looking.

I requested more detailed maps for the Ottawa area from Ontario Nature and quickly received them. Each map included the road network as well as the UTM coordinates that define the squares. This made it is easy to determine where there were gaps. The UTM coordinates, paired with my handy GPS, helped me find squares in the field.

Of course, looking for an undocumented species in a square is not always easy. Some species, however, including calling frogs, are easy to detect. On a wet spring night you can drive along back roads through multiple squares and detect calling frogs with little effort. I did this one night for the gray treefrog in Ottawa and beyond, easily adding the species to four grid squares. Three of the squares had historic records but no recent ones. In the one remaining square, gray treefrog had never been reported.

In fall 2014 I decided to survey snakes on roads east of Ottawa. Data for most amphibian and reptile species is sorely lacking in this part of the province. Snakes are known to migrate in the fall to hibernation locations, and are often found dead on roads. One afternoon in late September I found eight snakes on back roads in four different squares.

I encourage other Ontario Reptile and Amphibian Atlas co-ordinators to request detailed maps for their areas. With these in hand, it will be easier to locate square boundaries in the field and fill-in data gaps. 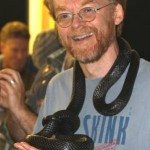 David Seburn is an ecological consultant specializing in species at risk.  He is both an Ottawa area coordinator and a provincial steering committee member of the Ontario Reptile and Amphibian Atlas.

3 Replies to “There’s a hole in my atlas”