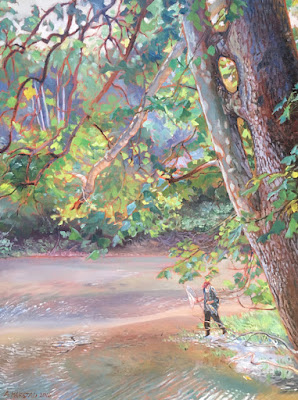 20 September 2016 found me on the bank of the Sydenham River, 4.3 km southeast of Alvinston, Ontario, painting the joined double trunks of a huge Sycamore tree as Fred waded the shallows, searching for freshwater mussels. This part of the Sydenham River flows through land that has recently been acquired for conservation by Ontario Nature, and we were there with staff and volunteers to survey the river for its general biodiversity and rare mussel species. This spot was perfect for the first of two paintings that commissioned by Ontario Nature. I set up my easel as close to the edge of the clay bank as possible, fascinated by the big old leaning Sycamore, its roots undercut by the river, its leafy crown towering high above the other river-edge trees – and how the mottled bark of its younger trunk was as smooth as my arm, while the bark of its main trunk was dark and scaly.

Down in the river there was much excitement as the first of each species was brought, dripping and gleaming, to the bank to be photographed. This river has more species of mussels than any other river in Canada – a Mecca for mussel enthusiasts! After we’d counted and measured them, the living individuals were returned to the river.

In my notes from the day: “1600 in the afternoon at the Sycamore tree, as it leans out over the milky river, Katydids “zeeeee” in the treetops. The river slips silently between its forested banks, trailing sparkling streaks of ripples over clay-coated pebble bars. A Kingfisher rattles, and a red bellied Woodpecker chatters like a Gray Tteefrog, and then a real treefrog chatters like a woodpecker – but with a peevish whicker.

The ground is rubbly with earthworm castings, and littered with ruby Hawthorn berries and snail shells among the garlic mustard and violets. On close observation, the seed capsules on the violet plants show a row of pearls in each little folder. Vines lean against trunks, and then scrawl and squiggle awkwardly among the branches like heavy black pen lines. High vines make leafy squirrel roads as they swath from tree to tree, and clinging, clothe parts of the crowns of dead trees with green mufflers – while down here, thin tend tendrils of Bindweed spiral up the stems of lesser vines.

As I stand looking up, searching for words to describe the vines among the trees, a light wavers on the undersides of the leaves of a small Black Maple, directly above my head, picking out every vein, illuminated in a beam of sunlight glanced off the water.