For decades, biologists across Ontario have been collecting data on amphibians and reptiles, collectively referred to as herpetofauna. Today these records are included in the Ontario Reptile and Amphibian Atlas (ORAA).

The ORAA divides Ontario into 10 x 10 km squares that make up a grid. Historical records (those from 20 or more years ago) tell us that forests within a given atlas grid square (10 km2) were once suitable habitat for the species found in these squares. Over the years, however, many of these grid squares have remained under-surveyed (e.g., they have not been surveyed at all or no records have been reported for this area). This has resulted in squares lacking records of even the most common species. While Ontario Nature may expect to find gaps in the atlas in remote areas, we are also finding data gaps in accessible areas, including provincial parks.

This lack of data may result in an underestimation of the distribution of reptiles and amphibians in Ontario, which could lead to the unsubstantiated assumption of species’ declines. David Seburn, an Ottawa atlas area coordinator and co-contributor to the Total Snake Index, recognized this issue among salamanders and decided to address it. He planned to search for salamanders in grid squares with historical records but no recent records of salamanders and asked me to tag along. I happily agreed to help. 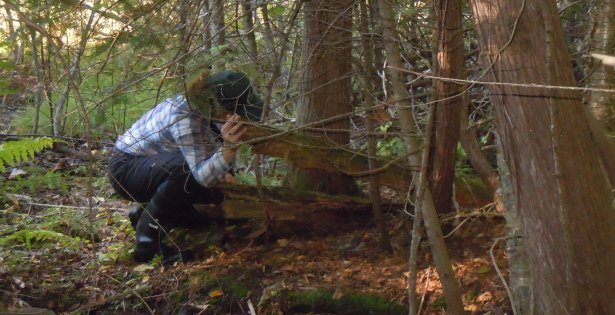 Dave’s simple plan involved the following steps:
1. Identify squares with historical records of salamanders but no recent ones.
2. Of those squares, identify those that are easily accessible.
3. Visit each of these squares to look for salamanders.

We visited 25 squares over a six-day period, searching for salamanders for an hour at each one. Once we stepped into the forest of a square we spread out in search of logs to flip and tallied the number of logs we surveyed. I quickly learned salamanders prefer partially decomposed logs, but don’t discriminate when it comes to size, shape or species of tree. They even hide under large strips of birch or pine bark as well as rocks of all shapes and sizes and man-made objects like sheets of metal and weathered plywood. 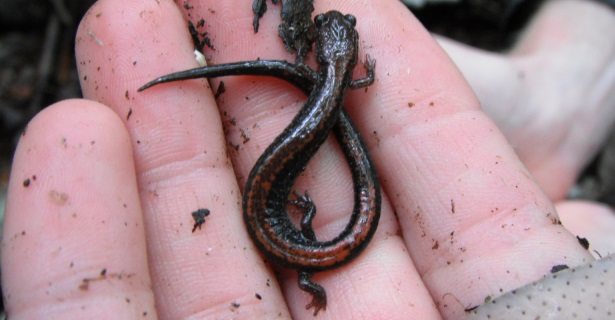 Each day we visited four to five squares located in forests on crown land and in Ontario Parks. One hour of surveying usually involved flipping upwards of 100 logs. At the end of the sixth day I had more to show than just a sore back and ten dirt-encrusted fingernails. In the 25 surveyed squares we encountered dozens of salamanders that had not been reported in the area in over 20 years including eastern red-back salamanders, several spotted (including the largest I had ever seen), blue-spotted and northern two-lined salamanders as well as two red-spotted newts. It was clear to us that salamanders had been undersurveyed in these squares.

… we need to fill these data gaps before we can draw conclusions on Ontario salamander populations.

This experience showed me how quickly someone can make a meaningful contribution to the ORAA. At some squares, it only took a few minutes to encounter one or more salamander species that had not been reported to the atlas in over two decades. It also showed me that we need to fill these data gaps before we can draw conclusions on Ontario salamander populations. If you are interested in learning more about the atlas, reptile and amphibian stewardship or volunteering with Ontario Nature, email me at erinm2@ontarionature.org.

We are grateful for the support of Ontario Wildlife Foundation and the Research Fund of the Ottawa Field Naturalists.

2 Replies to “Mind the data gap”