Finding Japanese chaff-flower: an unwanted addition to our flora

What conservation authorities mean to me

Finding Japanese chaff-flower: an unwanted addition to our flora

While strolling through the deciduous forest in September 2018, I looked down when a strange plant caught my eye.

It looked much like Lopseed? Opposite leaves and a long stalk with spikey seeds, but the leaves were too broad and rounded. Was there another species of phryma in eastern North America besides leptostachya? I did not think so.

I was botanizing on East Sister Island in the middle of Lake Erie, pretty much as far south as one can get and still be in Canada. The flora here reflects this low latitude, with many elements rarely seen elsewhere in the country. The canopy above me consisted of a unique co-dominant association of hackberry and Kentucky coffee-tree. Was the mystery plant a unique southern species that no one had previously found? As I walked further, I saw more of the spikey stalks. It was growing in robust patches.

“Oh-oh”, I thought. “This is definitely a non-native.”

I emailed a photograph of the plant to Michael Oldham at the Natural Heritage Information Centre (NHIC), one of Ontario’s foremost field botanists. Even Mike was stumped, so he forwarded my photo on to Dr. Anton Reznicek in Michigan, who recognized it immediately: Japanese chaff-flower, Achyranthes japonica. Not only had it never been reported from Canada, but also nowhere in the Lake Erie watershed. The nearest known location was near Cincinnati, Ohio, about 400 kilometres to the south.

One week later, I was visiting Middle Island, 20 kilometres southeast of East Sister and the most southern piece of Canadian turf, and part of Point Pelee National Park. I crossed through a semi-shaded moist depression. There it was again, another robust patch of Japanese chaff-flower!

As its name suggests, the chaff-flower is a native of Japan as well as China and Korea. What then was it doing here?

It was first recorded in North America along the upper Ohio River in 1981. Within 15 years, it had spread 500 kilometres along the Ohio River floodplain, dominating bottomlands to the exclusion of native flora. The plant is highly invasive, bad news for natural habitats. Each plant produces hundreds of seeds that spread by floating on water or by attaching to fur and feathers of wildlife.

What was the plant doing on two remote islands and apparently nowhere else around Lake Erie? Both East Sister and Middle Islands support huge nesting colonies of double-crested cormorants, in addition to smaller numbers of herons and gulls. It seems likely that some cormorants migrating north in spring had chaff-flower seeds attached to their feathers. When the seed-bearing feathers were shed on a suitable substrate on the islands, they started to grow.

Since the plant is known to cause serious ecological problems down south, I alerted Tammy Dobbie, park ecologist with Point Pelee, and Kristen Diemen, Ontario Parks ecologist (East Sister Island is a provincial nature reserve). Neither was aware of the plant’s presence, but both were concerned when they learned of the invasive nature and potential threat to the floral composition of these two unique sites. I also contacted the Canadian Food Inspection Agency, whose mandate is to keep abreast of new invasive species entering the country.

Parks Canada mounted a concerted effort to rid Middle Island of this new menace in the summer of 2019. They found that more than 10,000 plants had already taken root and were not just confined to moist areas. Smaller plants were hand-pulled, while the larger plants were applied with herbicide. Ontario Parks took a similar approach on East Sister Island, applying herbicide to all Japanese chaff-flowers that they could find. Both organizations are planning to continue with this effort in the 2020 growing season.

It may still be possible to prevent the chaff-flower from colonizing the forests of southern Ontario. Other large cormorant colonies in the province need to be surveyed for the plant’s presence and immediately eradicate the plant, if found. The plant may also arrive through other venues however. If Japanese chaff-flower becomes firmly established, it is likely to spread rapidly, adding to the list of notorious invasives that are displacing our native flora. 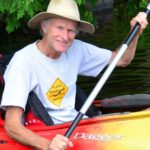 James Kamstra is a highly experienced field ecologist with a broad interest in natural history particularly in fields of botany, birds, reptiles, and insects. Presently, James is employed as a senior ecologist for AECOM where he conducts environmental impact studies, biophysical investigations, wetland evaluations and ecological restoration projects.

2 Replies to “Finding Japanese chaff-flower: an unwanted addition to our flora”

You Can Be a Part of Something Big

From time to time we send emails about conservation news, our work and opportunities for you to get involved in protecting wild species and wild spaces in Ontario.