The word science means different things to different people. Some people picture lab coats and test tubes, while others think of telescopes or dissection kits. Science does sometimes involve these things, but science is really a set of basic principles that can be applied to any question.

Although no test tubes or dissection kits were used in this simple experiment, the process of developing a question and reaching a conclusion is the essence of science, and this method has become the cornerstone of scientific investigation. Here is how Dr. Malcolm M. Campbell, professor and vice-principal of research at the University of Toronto Scarborough, defines science:

Science is a lens through which we gain the greatest understanding of our universe. From subatomic particles, to the workings of entire galaxies, from the elaboration of the building blocks of life, to the functioning of ecosystems – science provides the means to explore and know everything. Science is not a belief system, but an all-encompassing, immensely powerful tool that provides us with profound insights into the past, the present and the future. Science sits at the heights of human achievement – our way of making sense of all that occurs around us.

In this new blog, we will explore how science is applied to the conservation of wild species and spaces in Ontario. We will do this for two main reasons:

1. While most Ontarians are familiar with the environmental challenges facing our province, few  are aware of the incredible strides that scientists are making to inform and advance conservation.

2. By inviting scientists to share their research, we hope to broaden our readers’ vision of science and inspire them to get involved.

Science is fascinating, relevant and essential to the well-being of our species and our planet.

Our exploration of conservation science underway in Ontario begins with a blog on turtle nesting. Topics for the next few months are listed below.

July 2015: Conservation in the Great Lakes in the face of aquatic invaders

October 2015: Using conservation genetics to understand the impact of white-nose syndrome on bats

December 2015: Loss of forest cover and implications for woodland caribou

February 2016: Polar bears and habitat loss due to climate change 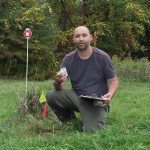 Allan Edelsparre is a PhD student at the University of Toronto – Scarborough studying the evolution and genetics of behaviour. From Denmark, Allan completed his BSc in Iceland before coming to Canada for his masters at the University of Guelph. He is an organizational champion for the Ontario Reptile and Amphibian Atlas.

One Reply to “New Blog Series”