I arrived at 6:30 a.m. to welcome 40-50 keen birders who had signed-up for a walk led by Mike Vandentillaart of York Simcoe Field Naturalists. Our plan was to tour the reserve’s deciduous woods and naturalized fields, both of which host an astonishing array of songbirds.

As soon as we entered the forest, we were serenaded by warblers, including the black-and-white and mourning. Vireos, ovenbirds, a scarlet tanager, eastern wood peewee and black-billed cuckoo joined in the song. At the edge of the forest, two more species sang a tune for us, eastern towhee and indigo bunting.

As amazing as our time in the forest was, are greatest thrill came while exploring a retired farm field. Unexpectedly, we heard a vesper sparrow. Mark Cranford, a regional director at Ontario Nature and an accomplished birder, could not believe his ears. He asked everyone to remain perfectly still and quiet so that he could confirm the call had indeed come from a vesper. It had!

Along with the vesper sparrow, we also heard a clay-coloured sparrow, song sparrows, an eastern meadowlark and a bobolink while walking through the field.

In addition, we saw a pair of ospreys soaring overhead. One of them had a good-sized fish clasped in its talons, suggesting the presence of a pond or stream nearby. Since childhood, ospreys have been my favourite raptor, and though they’re common, the sight of one still thrills me.

On the walk back to the parking lot, I chatted with one of the walk participants about my surprise at the variety of birds we had heard and seen, and my desire to improve my birding skills. He suggested I acquire Peterson’s “Birding by Ear” CDs and I determined to present this idea to my husband. After all, I have a birthday on the horizon. 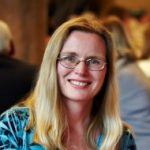 Lisa joined Ontario Nature in 2006 and currently oversees the Nature Network, a province-wide network of more than 140 naturalist groups and NGOs. An outdoor enthusiast, she enjoys hiking and camping, and looks forward to introducing her young daughter to Ontario’s wild places and species.