I frequently visit the Carden Plain Important Bird Area in the Kawarthas to photograph the many birds that pass through there during spring and fall migration. Having read that it was difficult to photograph the eastern loggerhead shrike – a critically endangered species in Canada – I was intrigued by a captive breeding and release program taking place in the area.

The eastern loggerhead shrike has disappeared from most of its range in Canada, and  survives in only a few isolated pockets of southern Ontario.

In 2003, Wildlife Preservation Canada (WPC) became the lead organization for a captive breeding and release program, the first of its kind for a migratory songbird. Although there has been some success – with captive-bred birds returning to Ontario to breed with wild birds – the shrike population in this province remains “troublingly low” according to Hazel Wheeler, species recovery biologist and recovery team member. Researchers found only 16 breeding pairs in Ontario this year, the lowest since the recovery program began in 1991.

Two young birds enjoy their first taste of the “wild blue yonder” after being released from enclosures in the Carden Plain Important Bird Area in late August.

Their unique but temporary colors – a red cap for one, blue chest bands for the other – allow researchers to identify and observe the behavior of individual birds during their first hours of freedom. 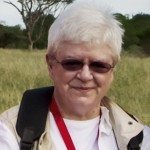 Lydia Dotto is a Peterborough-based science and nature photographer and writer. Capturing wildlife images is her passion and her greatest photographic challenge.

3 Replies to “Saving the shrike”