An affair to remember

The night before my very first birding trip, I was nervous. Not only was I entirely new to birds and the natural world, I didn’t even know how to use binoculars. By “entirely new” I mean I couldn’t even identify a robin. And, since I’m being honest here, I showed up for my first outing without binoculars. I didn’t own a pair. My new bird group wasn’t fazed by any of this. On the contrary: one birder loaned me his spare binoculars, another gave me quick pointers on how to use them, and a third provided me with a rundown of what to look for in our target bird of the morning: the red-necked grebe. 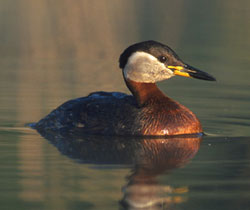 That first morning, I barely managed to see the red-necked wonder of a duck. My binocular pointing technique was so frenetic it nearly gave me motion sickness. Since most of the birds eluded me, the ducks looked indistinguishable, and the word grebe sounded no more exotic to me than mallard, I spent part of that freezing morning in early April examining other birders’ outfits up-close.

What surprised me was the attitude of my fellow birders. Here I was, a complete neophyte, and not only did the members in my group take an active interest in my ornithological education, but they pointed out every exciting bird they saw and didn’t leave my side until they were convinced I’d seen it as well.

I suspect I’ll be a beginner birder for the rest of my life, and that thought doesn’t terrify me in the least. I’ve never encountered anything but encouragement from other, more experienced birding gurus. The birders I’ve met on my outings are generous in their knowledge, endlessly patient with my gaffes and uninformed questions and never seem to get frustrated by my lack of ability. I’ve even been blessed with faithful bird blog readers who offer reading suggestions, provide bibliographical references, and correct my (frequent) mistakes, without ever tempering my enthusiasm. 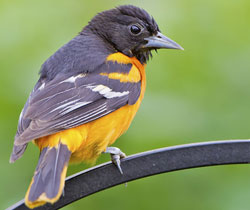 The great thing about birders is that they genuinely enjoy having beginners around. I finally understood this in early May, when I took my husband birding at the Leslie Spit for the first time and introduced him to one of my favorite spring migrants, the stunning Baltimore oriole. I too offered him pointers on binoculars usage and commiserated in earnest when all he could see were magnified leaves and branches. But once he marveled at the bird’s brilliant orange and black Halloween-costume demeanor, it felt like watching two friends become acquainted. And for a moment (albeit short-lived) he even considered me a birding genius.

What I would have given to see a Baltimore oriole again for the first time! And then it clicked: beginners offer experienced birders the chance to relive the magic of their first bird sightings.

I’ve been spoiled by the birders I’ve met, by their generosity of spirit, their excitement about teaching me how to look closely, their humility and their willingness to share their vast, often intimidating, knowledge. Watching other birders closely and learning to become a birder myself (ever so slowly) reminds me again and again of the great quote by Marcel Proust: “The real voyage of discovery consists not in seeking new landscapes but in having new eyes.”

5 Replies to “An affair to remember”