Crocuses are finally poking up through their winter hiding places. Ontarians can rejoice: spring is here and summer is right around the corner. Soon the air will fill with the humming and fluttering of pollinators including bees, butterflies and birds.

This spring, Ontario Nature Youth Council is running a campaign to protect beleaguered pollinators. The seeds of this campaign were sown at our winter retreat held at Camp Kawartha in February. Knowing that pollinators are essential for crop production and native plant propagation, and alarmed by Colony Collapse Disorder in honeybee colonies and the detrimental effects of neonicotinoids on bees in general, we chose the plight of pollinators as our campaign. We decided to tackle this issue head-on with a postcard campaign focusing on the use of neonicotinoids, often called neonics for short.

First, we informed ourselves with gusto about neonics and their use in Ontario. Neonics are powerful insecticides that cause irreversible neurological damage to insects and can bioaccumulate in animals that ingest them. Since their introduction to Ontario in the early 1990s, wild pollinator populations have steeply declined.

Some council members attended an Urban Beekeeper’s Association meeting at which we learned that the rusty-patched bumblebee’s population has declined by more than 90 percent since the late 1980s. Coincidence? We think not. We believe that neonics are a big part of the problem for this bee and other pollinators, along with habitat destruction and climate change.

More determined than ever, the council gathered at Ontario Nature’s office in March to work out the details of our campaign. At this brainstorming session and in follow-up phone conversations we decided on our key message, accompanying image and design, what material to use for the postcards, how many to print and where to use them. We are currently asking people to sign the postcards at Ontario Nature and council events, at our schools and basically anywhere else we go. Later in the spring we will present thousands of signed postcards to the Premier and the Minister of Agriculture and Food. We hope that our efforts will ensure the long term survival of pollinators in Ontario.

In addition, we just created a social media challenge to see if we can get 500 people to endorse our pollinator campaign. If we reach our goal the message will broadcast through the networks of all the endorsers. Please endorse our campaign! 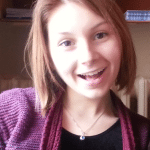 Mariel Lepra is a member of the Ontario Nature Youth Council. She is a high school student with a passion for biology and conservation. When not studying, Mariel enjoys hiking, reading, practising yoga and spending time outdoors.